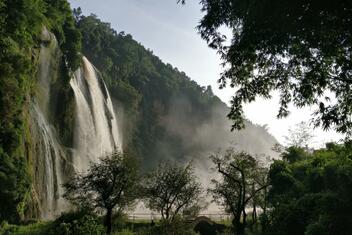 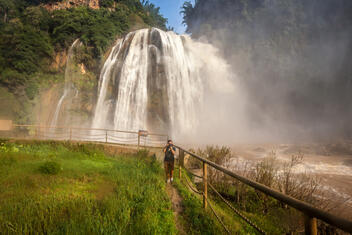 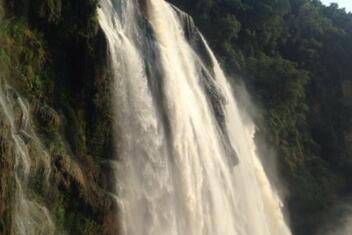 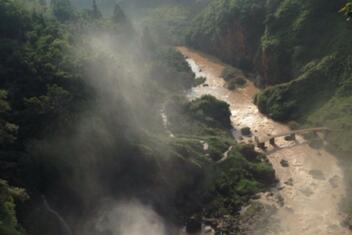 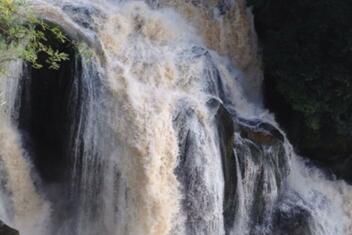 Note: Dadieshui Waterfall has been closed for a few years, although some people do manage to enter the area and visit the waterfall. Visit at your own risk!

Dadieshui Waterfall is located 25 km southwest of Shilin County, and is the largest and most spectacular waterfall in Yunnan Province. It is also known as the "Flying Dragon Waterfall" and was formed by the fall of the Bajiang River, a tributary of the Nanpan River. The river is met by two parallel fracture layers with two large drops, creating one small fall and one big fall.

A great spectacle of the Dadieshui Waterfall, the "Water Jet" gets its name from the thundering sound created by the large body of water falling and smashing onto the bottom of the valley.

Other scenic spots, such as Pearl Spring, Big Fall, Small Fall, Sage’s Cave, and Clear River are also worth checking out. Under the sunlight, the mist will transform into a magnificent rainbow. By reaching out their hands, visitors can touch the colors, and enjoy a truly magical moment.

The waterfall is known as the first waterfall on the Pearl River, and the best season to visit is from June to August each year, due to the increase of water the rainy season brings along. It is also the location where Jackie Chan leaped into the waterfall in the movie "The Myth."